Listen to Darkness Of Your Embrace

Call it a V2 side project. After the release of our cd, Showdown, an unintentionally hiatus occured. This gap lasted until early 2018. Martin went on doing his top 2000 piano shows, and other musical activities, but V2 is/was (temporarily ?) put on hold. As far as other musical activities are concerned, Ernst and yours truly do and did not sit back effortlessly. I already composed and recorded new tracks and lyrics, doing all of the instruments by myself, with a little help from modern technology. Ernst helped me out with vocals, rearranging lyrics, and contributing some (older) material of his own. Contributions of Martin are not excluded. Kay Ettema contributed with his fine artwork and with this the co-production has completed. You soon can find some material on Soundcloud, and the project’s name is “Lam”. We keep you posted when this will happen, so you also can enjoy our new music !

V2, was  born out of a passion for making  good Music. Progressive, rock, metal…as long as it was filled with emotion and good melodies, it was good! Original founders;  Martin van Gulik and Bert Ettema at that time were  busy doing their (respectively) keyboard and guitar things  in bands such as Quizzical Smile, Angus, Altered Moves two. Both fellows achieved respect and appreciation from fans, but there was a gap that needed to be filled. Martin doing his pop rock thing, but in the meantime  listening to more heavy music, and Bert doing his Judas Priest, Iron Maiden inspired music with Angus and later on with Altered Moves two, but also enjoys listening to classical soundtracks and sixties and seventies pop and rock music. So they had (at least) one thing in common…, symphonic rock, with Rush as their favourite threesome. Also appreciated were Toto, Journey, Marillion and early Dream Theater. Being long time friends, it was easy to join forces. They choose the name of Vision and created their first demo(cd) called “ Eclipse of the Mind”. Recorded with the means of that time (including an Atari pc and a Fostex 4 track cassette recorder), and doing all the instruments themselves, it turned out well, containing six strong compositions. Ernst Honingman, a vocalist and friend of the guys, did some fine lead singing, as well as Bert did. Five songs would appear on later releases, and one is still waiting for a rerecording.

So the demo was well received. Enthusiastic friends, families, fans and local radio stations, but there was not a record company that dared to jump in, and gave the boys their well deserved record deal.  No problem there. Martin and Bert bought new equipment and built  a serious home studio. It was called “The Gabel” (ask Martin what that means…), the name was changed into “Ettema and Van Gulik’s Vision” and between 1995 and 1998 the cd, ” Indefinite and Mysterious”, was composed, recorded and released. Again the Vision men did most of the instruments themselves, but Ernst, again, did a great job laying down great vocals and melodies. Bert’s long time friend Robert Voogt sang a rerecorded version of “I’m a fool with love” . An Angus song that should have been a classic rock mega hit.  This time the bass guitar was handled by Marco Goedhart, and Willem de Fouw  came along to do some fine backing vocals. The cover painting was done by Bert.

It was, and still is a beautiful piece of symphonic hard rock. Influences of earlier bands mentioned are there, but the guys created something new. Not easy to put a label on, so to say. Yes, there was airplay, sales, lots of appreciation and enthusiasm, but alas…the big break through did not happen. Martin and Bert continued making music, of course, but after several attempts getting it on the rails, it remained  silent  for years.

But the flame of Vision never died. Eighteen years after their last release, Martin, Bert and Ernst, who now is a valuable  and unmissable member of the project, are back with a brand new cd…”Showdown”. “Ettema and Van Gulik’s Vision”, has become “V2”, (which stands for Vision two, and has nothing to do with those damned rocket missiles that caused disaster in world war two). Like the aging of good wine, it took them  five years. You can taste it in the music .There are eight fresh new songs and one rerecorded song which also appeared on the first demo, named “Sundance”. The recording was done, again, at “The Gabel” now turned into a modern studio where digital equipment rules, but where the analog tools and aera are not forgotten. Nine pieces of musical art. Diversity is the keyword this time.  There is true (progressive) heavy metal and modern keyboard orientated  hard rock, also instrumental stadium rock. Not to forget the sensitive ballad type of songs going on there.  Martin and Bert did keys, bass, guitars and midi programming. Ernst did his beautiful thing, and again contributed strong vocal melodies and additional lyrics. Like in a good tradition, Robert Voogt was there to sing the heavy weight metal song ” The Servant…Caelum et Terras Miscere”, and Jochem van Rijn did great drumming on seven of the nine songs. This time the guys asked for professional help to do the mix and mastering. Evert Abbing was the man, an authority in the land of music, engineering and producing. Bert, again, did the cover painting, and his son, Kay, did an excellent job on the artwork and art design.

So there you have it. A brand new endeavour of V2 to finally  achieve their place in progressive metal land. Enjoy! 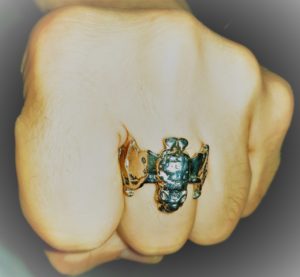